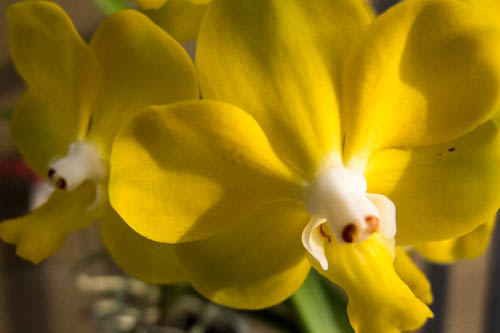 So I guess I am a morning person. Here I am enjoying a beautiful early Sunday morning.

The lovely thing about Thailand is that when the sun rises, it rises very fast, so it’s always bright and sunny at about 6-7am. I like getting up at that time, and enjoying the few precious hours to relax before I feel like I should do anything. It’s still early, there’s no rush. I’ve had a long week. I can do everything later on.

This morning I’ve climbed around drying washing to water my orchids on the balcony, which made me think about how I should post some pictures of my new ones. The purple one (Denrobium), I’ve actually had it for at least a year now, but it’s only just flowered. And so many flowers! I’m very happy.

Having said that… here is a wonderful song from Sia Furler, one of my, if not my favourite artist. I always think of this song on Sundays. Video. Live.

This is my song for today – Zero 7, Sia’s just got such a good voice!

I’m gutted I left my Holga in the UK. Last minute when I had too much stuff, I decided that I would not take it and buy one in Thailand. I was sure it would be easy… after all I originally bought it on ebay from Asia… Hong Kong I think.

Thailand though, not so much.

So today I went on a bit of a hunt. Good old google pointed me in the direction of ‘Loft’ in Siam Discovery Centre, I don’t think I’ve ever been in there! It’s a really cool shop actually, there’s lots of random bits and bobs, gifts and the like. Now I wish I had a photo or two to put up… hmph.

Well after looking around the whole 2 floors of the shop… I came out and realised the cameras were right by the entrance I had come in. Typical. They had a Takeshi Camera, which I guess is a digital Holga, and some other various underwater cameras, and a couple of Holgas, I think they were both 35mm film ones, glass lens and one was a TLR I think. They were around the 4000 baht mark!! That’s quite a lot for a plastic camera! Hmmmm…

Next I went into B2S in Central World. Came across another Twin Reflex at 990 baht and a few underwater cameras a lot cheaper.

But not much selection. I may try chinatown. Fingers crossed.

So now I am eating instant noodles, on account of all the rain that has just happened. Getting a little worried about the flooding… but I think I’ll be ok where I am… wait and see!

A Blog With A Hint Of Ginger Zest

The Puddlewonder Press
Till Twenty-Five